The Porsche Cayenne entered the market with mixed anticipation. However, it soon proved that it was the performance vehicle among SUV’s and was praised for its excellent handling and powerful engines. The lineup initially consisted of the V8-powered Cayenne S and Cayenne Turbo. Later in the model cycle, VR6 and diesel-powered versions joined the lineup.

The base model is powered by a 3.2-L VR6 engine producing 250 PS (184 kW); modifications in the exhaust manifold allow power to peak at 6700 rpm. The Engine block & doors are the only components which are shared across the VW Toureg & Acceleration from 0 to 60 mph (97 km) is done in approx 7.5 seconds with manual transmission and 8.1 seconds with the Tiptronic S.

Originally a racing vehicle for Transsyberia rally, only 26 were built.[8]

The street version was later built to commemorate Porsche’s victory in Transsyberia rally. It is a variant with the 405 hp (302 kW) direct-inject 4.8-L V8 from the Cayenne GTS. Sales began in January 2009.[9]

In May 2009,[10] a limited edition version based on Cayenne GTS was introduced, designed by Porsche Design Studio and included a Porsche Design chronograph Type P’6612. Production was limited to 1000 units, 100 in the USA.[11] 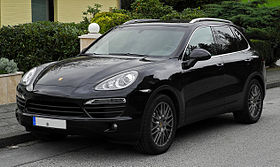 The second-generation Porsche Cayenne went on sale in April–May 2010 as a 2011 model, with an official debut at the 2010Geneva Motor Show. In preparation for the unveiling, the Cayenne production facility in Leipzig, Germany, closed in December 2009 to commence factory retooling for the new model, a process that took 2–3 months.

The 2011 Porsche Cayenne is larger than its predecessors, but features a more slanted rear window, less upright windshield, a more sloping roofline, door-mounted mirrors, smaller windows at the rear of the vehicle, headlights inspired by the Carrera GT, taillights that extend onto the car’s tailgate, LED daytime running lights and a vastly redesigned interior modeled after the Panamera.[14] The 2011 Cayenne is almost 250 kg (550 lb) lighter than the previous models due to extensive use of aluminum and magnesium, making it more fuel efficient than the previous lineup.[15] Despite its lower stance, the new vehicle’s off-road capabilities have been retained without compromising the street performance-oriented layout and design.[citation needed]. In addition to a diesel offering, a hybrid version is available.[16] Also, the 2015 diesel Porsche Cayenne was in the Volkswagen emissions scandal.

The Cayenne’s naturally aspirated and turbocharged V8 engines are shared with the Panamera and have been upgraded for faster acceleration times with more horsepower and torque, as well as more powerful direct-injection technology to improve efficiency. The base Cayenne model Cayenne is tuned to offer 300 hp.

The Cayenne comes powered by a 3.6-L VR6 engine producing 300 PS (221 kW; 296 hp), the Cayenne S features the same 4.8-L V8 in the Panamera S models producing 400 PS (294 kW; 395 hp) and the Cayenne Turbo comes with Panamera Turbo’s 4.8-L twin turbo V8 producing 500 PS (368 kW; 493 hp).[15] The Cayenne S Hybrid uses an Volkswagen-sourced 3.0-L V6 engine producing 333 PS (245 kW; 328 hp) paired with a lithium ion battery capable of 47 PS (35 kW; 46 hp) for a total of 380 PS (279 kW; 375 hp).[18] A manual gearbox serves as the standard transmission system on the base Cayenne, with all other models featuring an eight-speed Tiptronic as standard equipment. The low-range transfer case found in the previous generation has been removed. All vehicles will feature about 10% less weight than their predecessors, 70 kg worth of standard equipment in excess of that found on the current model and a more heavily contoured rear bench.

In September 2012 Porsche announced the Cayenne S Diesel.[20] This model is fitted with the Volkswagen 4.1-L V8 TDI engine. In October 2012, Porsche confirmed the addition of a new Cayenne Turbo S.[21]

In July 2014, Porsche launched a facelifted Cayenne range, with minor exterior alterations and new power-train options, including a plug-in E-Hybrid and downsizing of the S model’s 4.8-L V8 to a turbocharged 3.6-L V6.

Notable modifications to this car include an electric vacuum pump and hydraulic steering pump, allowing the car to function even when the engine is deactivated. A 288-volt nickel metal hydride battery is placed under the boot floor, occupying the space normally used for a spare tire.[22]

The Porsche Cayenne S E-Hybrid is a plug-in hybrid.

In July 2014, Porsche announced the launch of the Porsche Cayenne S E-Hybrid, a plug-in hybrid with an all-electric range between 18 and 36 km (11 and 22 mi) under the New European Driving Cycle (NEDC) standard. The plug-in model displaced the Cayenne S Hybrid from the line up, and it is part of the revised range. The Cayenne S E-Hybrid is the first plug-in hybrid in the premium SUV segment, allowing Porsche to become the first automaker with three production plug-in hybrid models.[25] Deliveries in Germany were scheduled to begin in October 2014.[26] Sales in the U.S. began in November 2014.[27]

The following are the official EPA ratings of the Cayenne S E-Hybrid compared with the others models of the 2015 line up available in the U.S.:

(PO536)
The third-generation Porsche Cayenne was revealed online on August 29, 2017 as a 2019 model, based on the Volkswagen Group MLB platform.[32]Engines.
All engines of the third generation models are turbocharged.[32]
Source: https://en.wikipedia.org/wiki/Porsche_Cayenne

Originalparts catalog for 92A in pdf

Various DIY for 92A (Rennlist)
such as, oil change and battery change (for your connivance converted to PDF)

Video section of several maintenance items for a 2013 Cayenne

Video section for various DIY work on a 955. From changing the waterpump to Replace the Control Arms (by DIY Dan)

Please note, those links are DIY some other Porsche drivers have done to their cars. We can not be responsible for anything that happens if you do this to your car.

Please join us at